Your Majesty, Members of the Nobel Committee, Brothers and Sisters.

I am very happy to be here with you today to receive the Nobel Prize for Peace. I feel honored, humbled and deeply moved that you should give this important prize to a simple monk from Tibet I am no one special. But I believe the prize is a recognition of the true value of altruism, love, compassion and non-violence which I try to practice, in accordance with the teachings of the Buddha and the great sages of India and Tibet

I accept the prize with profound gratitude on behalf of the oppressed everywhere and for all those who struggle for freedom and work for world peace. I accept it as a tribute to the man who founded the modern tradition of non-violent action for change Mahatma Gandhi whose life taught and inspired me. And, of course, I accept it on behalf of the six million Tibetan people, my brave countrymen and women inside Tibet, who have suffered and continue to suffer so much. They confront a calculated and systematic strategy aimed at the destruction of their national and cultural identities. The prize reaffirms our conviction that with truth, courage and determination as our weapons, Tibet will be liberated. 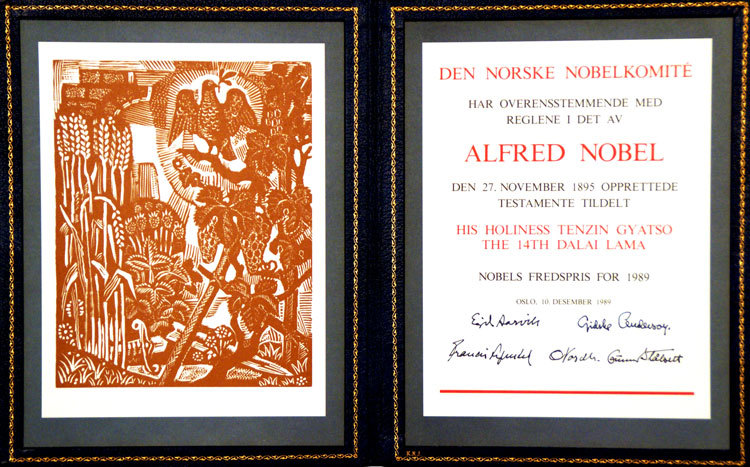 No matter what part of the world we come from, we are all basically the same human beings. We all seek happiness and try to avoid suffering. We have the same basic human needs and is concerns. All of us human beings want freedom and the right to determine our own destiny as individuals and as peoples. That is human nature. The great changes that are taking place everywhere in the world, from Eastern Europe to Africa are a clear indication of this.

In China the popular movement for democracy was crushed by brutal force in June this year. But I do not believe the demonstrations were in vain, because the spirit of freedom was rekindled among the Chinese people and China cannot escape the impact of this spirit of freedom sweeping many parts of the world. The brave students and their supporters showed the Chinese leadership and the world the human face of that great nation.

Last week a number of Tibetans were once again sentenced to prison terms of upto nineteen years at a mass show trial, possibly intended to frighten the population before today's event. Their only 'crime" was the expression of the widespread desire of Tibetans for the restoration of their beloved country's independence.

It is with this in mind that I proposed negotiations between Tibet and China on numerous occasions. In 1987, I made specific proposals in a Five-Point plan for the restoration of peace and human rights in Tibet. This included the conversion of the entire Tibetan plateau into a Zone of Ahimsa, a sanctuary of peace and non-violence where human beings and nature can live in peace and harmony.

last year, I elaborated on that plan in Strasbourg, at the European Parliament I believe the ideas I expressed on those occasions are both realistic. and reasonable although they have been criticised by some of my people as being too conciliatory. Unfortunately, China's leaders have not responded positively to the suggestions we have made, which included important concessions. If this continues we will be compelled to reconsider our position.

As a Buddhist monk, my concern extends to all members of the human family and, indeed, to all sentient beings who suffer. I believe all suffering is caused by ignorance. People inflict pain on others in the selfish pursuit of their happiness or satisfaction. Yet true happiness comes from a sense of brotherhood and sisterhood. We need to cultivate a universal responsibility for one another and the planet we share. Although I have found my own Buddhist religion helpful in generating love and compassion, even for those we consider our enemies, I am convinced that everyone can develop a good heart and a sense of universal responsibility with or without religion.

With the ever growing impact of science on our lives, religion and spirituality have a greater role to play reminding us of our humanity. There is no contradiction between the two. Each gives us valuable insights into the other. Both science and the teachings of the Buddha tell us of the fundamental unity of all things. This understanding is crucial if we are to take positive and decisive action on the pressing global concern with the environment.

I believe all religions pursue the same goals, that of cultivating human goodness and bringing happiness to all human beings. Though the means might appear different the ends are the same.

As we enter the final decade of this century I am optimistic that the ancient values that have sustained mankind are today reaffirming themselves to prepare us for a kinder, happier twenty-first century.

I pray for all of us, oppressor and friend, that together we succeed in building a better world through human under-standing and love, and that in doing so we may reduce the pain and suffering of all sentient beings.