It is a great honour for me to receive the Congressional Gold Medal. This recognition will bring tremendous joy and encouragement to the Tibetan people, for whom I have a special responsibility. Their welfare is my constant motivation and I always consider myself as their free spokesperson. I believe that this award also sends a powerful message to those many individuals who are dedicated to promoting peace, understanding and harmony. 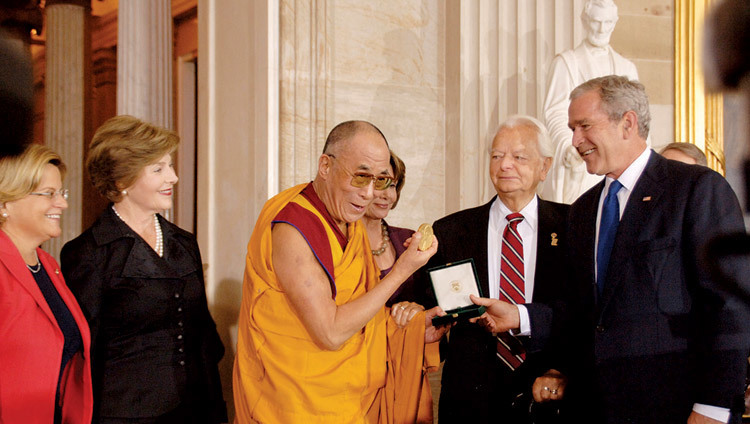 On a personal note, I am deeply touched that this great honour has been given to me, a Buddhist monk born of a simple family from the remote Amdo region of Tibet. As a child I grew up under the loving care of my mother, a truly compassionate woman. And after my arrival in Lhasa at the age of four, all the people around me, my teachers and even the housekeepers, taught me what it means to be kind, honest, and caring. It is in such an environment that I grew up. Later my formal education in Buddhist thought exposed me to concepts such as interdependence and the human potential for infinite compassion. It is these that gave me a profound recognition of the importance of universal responsibility, non-violence, and inter-religious understanding. Today, it is a conviction in these values that gives me the powerful motivation to promote basic human values. Even in my own struggle for the rights and greater freedom of the Tibetan people, these values continue to guide my commitment to pursuing a non-violent path.

I have had the honour to be in this hall once before when I visited your country in 1991. Many of the faces that welcomed me then, I can see today, which gives me great joy. Many have retired and some are sadly no longer with us. However, I would like to take this opportunity to recognize their kindness and contribution. Our American friends have stood with us in the most critical of times and under most intense pressure.

Mr. President, thank you for your strong support, and for the warm friendship that Mrs. Bush and you have extended to me personally. I am deeply grateful to you for your sympathy and support for Tibet, and your firm stand on religious freedom and the cause of democracy. Madam Speaker, you have not only extended an unwavering support to me and the just cause of the Tibetan people, you have also worked hard to promote the cause of democracy, freedom and the respect for human rights in other parts of the world. For this, I would like to offer my special thanks.

The consistency of American support for Tibet has not gone unnoticed in China. Where this has caused some tension in the US-China relations, I feel a sense of regret. Today, I wish to share with you all my sincere hope that the future of Tibet and China will move beyond mistrust to a relationship based on mutual respect, trust and recognition of common interests.

Today we watch China as it rapidly moves forward. Economic liberalization has led to wealth, modernization and great power. I believe that today's economic success of both India and China, the two most populated nations with long history of rich culture, is most deserving. With their newfound status, both of these two countries are poised to play important leading role on the world stage. In order to fulfil this role, I believe it is vital for China to have transparency, rule of law and freedom of information. Much of the world is waiting to see how China's concepts of "harmonious society" and "peaceful rise" would unfold. Today's China, being a state of many nationalities, a key factor here would be how it ensures the harmony and unity of its various peoples. For this, the equality and the rights of these nationalities to maintain their distinct identities are crucial.

With respect to my own homeland Tibet, today many people, both from inside and outside, feel deeply concerned about the consequences of the rapid changes taking place. Every year, the Chinese population inside Tibet is increasing at an alarming rate. And, if we are to judge by the example of the population of Lhasa, there is a real danger that the Tibetans will be reduced to an insignificant minority in their own homeland. This rapid increase in population is also posing serious threat to Tibet's fragile environment. Being the source of many of Asia's great rivers, any substantial disturbance in Tibet's ecology will impact the lives of hundreds of millions. Furthermore, being situated between India and China, the peaceful resolution of the Tibet problem also has important implications for lasting peace and friendly relation between these two great neighbours.

On the future of Tibet, let me take this opportunity to restate categorically that I am not seeking independence. I am seeking a meaningful autonomy for the Tibetan people within the People's Republic of China. If the real concern of the Chinese leadership is the unity and stability of PRC, I have fully addressed their concerns. I have chosen to adopt this position because I believe, given the obvious benefits especially in economic development, this would be in the best interest of the Tibetan people. Furthermore, I have no intention of using any agreement on autonomy as a stepping-stone for Tibet's independence.

I have conveyed these thoughts to successive Chinese leaders. In particular, following the renewal of direct contact with the Chinese government in 2002, I have explained these in detail through my envoys. Despite all this, Beijing continues to allege that my "hidden agenda" is separation and restoration of Tibet's old socio-political system. Such a notion is unfounded and untrue.

Even in my youth, when I was compelled to take on the full responsibility of governance, I began to initiate fundamental changes in Tibet. Unfortunately, these were interrupted because of the political upheavals that took place. Nevertheless, following our arrival in India as refugees, we have democratised our political system and adopted a democratic charter that sets guidelines for our exile administration. Even our political leadership is now directly chosen by the people on a five-year term basis. Moreover, we have been able to preserve and practice most of the important aspects of our culture and spirituality in exile. This is due largely to the kindness of India and its people.

Another major concern of the Chinese government is its lack of legitimacy in Tibet. While I cannot rewrite the past, a mutually agreeable solution could bring legitimacy, and I am certainly prepared to use my position and influence among the Tibetan people to bring consensus on this question. So I would also like to restate here that I have no hidden agenda. My decision not to accept any political office in a future Tibet is final.

The Chinese authorities assert that I harbour hostility towards China and that I actively seek to undermine China's welfare. This is totally untrue. I have always encouraged world leaders to engage with China; I have supported China's entry into WTO and the awarding of summer Olympics to Beijing. I chose to do so with the hope that China would become a more open, tolerant and responsible country.

A major obstacle in our ongoing dialogue has been the conflicting perspectives on the current situation inside Tibet. So in order to have a common understanding of the real situation, my envoys in their sixth meeting with their Chinese counterparts suggested that we be given an opportunity to send study groups to look at the actual reality on the ground, in the spirit of "seeking truth from facts." This could help both sides to move beyond each other's contentions.

The time has come for our dialogue with the Chinese leadership to progress towards the successful implementation of a meaningful autonomy for Tibet, as guaranteed in the Chinese constitution and detailed in the Chinese State Council "White Paper on Regional Ethnic Autonomy of Tibet." Let me take this opportunity to once again appeal to the Chinese leadership to recognize the grave problems in Tibet, the genuine grievances and deep resentments of the Tibetan people inside Tibet, and to have the courage and wisdom to address these problems realistically in the spirit of reconciliation. To you, my American friends, I appeal to you to make every effort to seek ways to help convince the Chinese leadership of my sincerity and help make our dialogue process move forward.

Since you have recognized my efforts to promote peace, understanding and non-violence, I would like to respectfully share a few related thoughts. I believe this is precisely the time that the United States must increase its support to those efforts that help bring greater peace, understanding and harmony between peoples and cultures. As a champion of democracy and freedom, you must continue to ensure the success of those endeavours aimed at safeguarding basic human rights in the world. Another area where we need US leadership is environment. As we all know, today our earth is definitely warming up and many scientists tell us that our own action is to a large part responsible. So each one of us must, in whatever way we can, use our talents and resources to make a difference so that we can pass on to our future generations a planet that is at least safe to live on.

Many of world's problems are ultimately rooted in inequality and injustice, whether economic, political or social. Ultimately, this is a question of the well being of all of us. Whether it is the suffering of poverty in one part of the world, or whether it is the denial of freedom and basic human rights in another part, we should never perceive these events in total isolation. Eventually their repercussions will be felt everywhere. I would like to appeal to you to take a leadership role in an effective international action in addressing these problems, including the huge economic imbalance. I believe the time has now come to address all these global issues from the perspective of the oneness of humanity, and from a profound understanding of the deeply interconnected nature of our today's world.

In conclusion, on behalf of six million Tibetan people, I wish to take this opportunity to recognize from the depth of my heart the support extended to us by the American people and their government. Your continued support is critical. I thank you once again for the high honour that you have bestowed on me today. Thank you.

Video of His Holiness the Dalai Lama's acceptance speech here.