Today marks the 52nd anniversary of the Tibetan people’s peaceful uprising of 1959 against Communist China’s repression in the Tibetan capital Lhasa, and the third anniversary of the non-violent demonstrations that took place across Tibet in 2008. On this occasion, I would like to pay tribute to and pray for those brave men and women who sacrificed their lives for the just cause of Tibet. I express my solidarity with those who continue to suffer repression and pray for the well-being of all sentient beings. 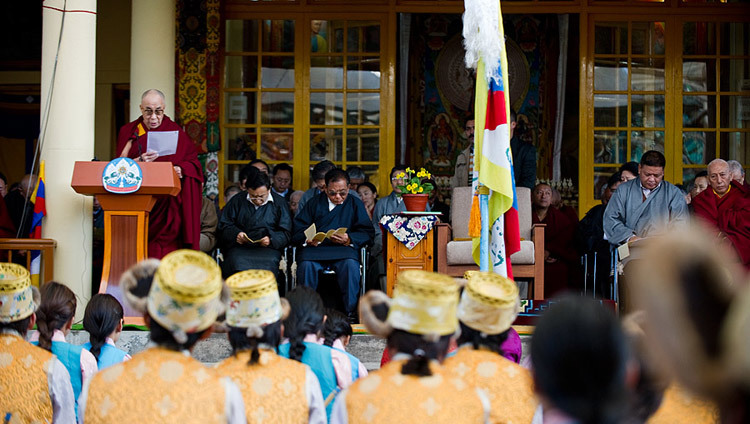 For more than sixty years, Tibetans, despite being deprived of freedom and living in fear and insecurity, have been able to maintain their unique Tibetan identity and cultural values. More consequentially, successive new generations, who have no experience of free Tibet, have courageously taken responsibility in advancing the cause of Tibet. This is admirable, for they exemplify the strength of Tibetan resilience.

This Earth belongs to humanity and the People’s Republic of China (PRC) belongs to its 1.3 billion citizens, who have the right to know the truth about the state of affairs in their country and the world at large. If citizens are fully informed, they have the ability to distinguish right from wrong. Censorship and the restriction of information violate basic human decency. For instance, China’s leaders consider the communist ideology and its policies to be correct. If this were so, these policies should be made public with confidence and open to scrutiny.

China, with the world’s largest population, is an emerging world power and I admire the economic development it has made. It also has huge potential to contribute to human progress and world peace. But to do that, China must earn the international community’s respect and trust. In order to earn such respect China’s leaders must develop greater transparency, their actions corresponding to their words. To ensure this, freedom of expression and freedom of the press are essential. Similarly, transparency in governance can help check corruption. In recent years, China has seen an increasing number of intellectuals calling for political reform and greater openness. Premier Wen Jiabao has also expressed support for these concerns. These are significant indications and I welcome them.

The PRC is a country comprising many nationalities, enriched by a diversity of languages and cultures. Protection of the language and culture of each nationality is a policy of the PRC, which is clearly spelt out in its constitution. Tibetan is the only language to preserve the entire range of the Buddha’s teachings, including the texts on logic and theories of knowledge (epistemology), which we inherited from India’s Nalanda University. This is a system of knowledge governed by reason and logic that has the potential to contribute to the peace and happiness of all beings. Therefore, the policy of undermining such a culture, instead of protecting and developing it, will in the long run amount to the destruction of humanity’s common heritage.

The Chinese government frequently states that stability and development in Tibet is the foundation for its long-term well-being. However, the authorities still station large numbers of troops all across Tibet, increasing restrictions on the Tibetan people. Tibetans live in constant fear and anxiety. More recently, many Tibetan intellectuals, public figures and environmentalists have been punished for articulating the Tibetan people’s basic aspirations. They have been imprisoned allegedly for “subverting state power” when actually they have been giving voice to the Tibetan identity and cultural heritage. Such repressive measures undermine unity and stability. Likewise, in China, lawyers defending people’s rights, independent writers and human rights activists have been arrested. I strongly urge the Chinese leaders to review these developments and release these prisoners of conscience forthwith.

The Chinese government claims there is no problem in Tibet other than the personal privileges and status of the Dalai Lama. The reality is that the ongoing oppression of the Tibetan people has provoked widespread, deep resentment against current official policies. People from all walks of life frequently express their discontentment. That there is a problem in Tibet is reflected in the Chinese authorities’ failure to trust Tibetans or win their loyalty. Instead, the Tibetan people live under constant suspicion and surveillance. Chinese and foreign visitors to Tibet corroborate this grim reality.

Therefore, just as we were able to send fact-finding delegations to Tibet in the late 1970s and early 1980s from among Tibetans in exile, we propose similar visits again. At the same time we would encourage the sending of representatives of independent international bodies, including parliamentarians. If they were to find that Tibetans in Tibet are happy, we would readily accept it.

The spirit of realism that prevailed under Mao’s leadership in the early 1950s led China to sign the 17-point agreement with Tibet. A similar spirit of realism prevailed once more during Hu Yaobang’s time in the early 1980s. If there had been a continuation of such realism the Tibetan issue, as well as several other problems, could easily have been solved. Unfortunately, conservative views derailed these policies. The result is that after more than six decades, the problem has become more intractable.

The Tibetan Plateau is the source of the major rivers of Asia. Because it has the largest concentration of glaciers apart from the two Poles, it is considered to be the Third Pole. Environmental degradation in Tibet will have a detrimental impact on large parts of Asia, particularly on China and the Indian subcontinent. Both the central and local governments, as well as the Chinese public, should realise the degradation of the Tibetan environment and develop sustainable measures to safeguard it. I appeal to China to take into account the survival of people affected by what happens environmentally on the Tibetan Plateau.

In our efforts to solve the issue of Tibet, we have consistently pursued the mutually beneficial Middle-Way Approach, which seeks genuine autonomy for the Tibetan people within the PRC. In our talks with officials of the Chinese government’s United Front Work Department we have clearly explained in detail the Tibetan people’s hopes and aspirations. The lack of any positive response to our reasonable proposals makes us wonder whether these were fully and accurately conveyed to the higher authorities.

Since ancient times, Tibetan and Chinese peoples have lived as neighbours. It would be a mistake if our unresolved differences were to affect this age-old friendship. Special efforts are being made to promote good relations between Tibetans and Chinese living abroad and I am happy that this has contributed to better understanding and friendship between us. Tibetans inside Tibet should also cultivate good relations with our Chinese brothers and sisters.

In recent weeks we have witnessed remarkable non-violent struggles for freedom and democracy in various parts of North Africa and elsewhere. I am a firm believer in non-violence and people-power and these events have shown once again that determined non-violent action can indeed bring about positive change. We must all hope that these inspiring changes lead to genuine freedom, happiness and prosperity for the peoples in these countries.

One of the aspirations I have cherished since childhood is the reform of Tibet’s political and social structure, and in the few years when I held effective power in Tibet, I managed to make some fundamental changes. Although I was unable to take this further in Tibet, I have made every effort to do so since we came into exile. Today, within the framework of the Charter for Tibetans in Exile, the Kalon Tripa, the political leadership, and the people’s representatives are directly elected by the people. We have been able to implement democracy in exile that is in keeping with the standards of an open society.

As early as the 1960s, I have repeatedly stressed that Tibetans need a leader, elected freely by the Tibetan people, to whom I can devolve power. Now, we have clearly reached the time to put this into effect. During the forthcoming eleventh session of the fourteenth Tibetan Parliament in Exile, which begins on 14th March, I will formally propose that the necessary amendments be made to the Charter for Tibetans in Exile, reflecting my decision to devolve my formal authority to the elected leader.

Since I made my intention clear I have received repeated and earnest requests both from within Tibet and outside, to continue to provide political leadership. My desire to devolve authority has nothing to do with a wish to shirk responsibility. It is to benefit Tibetans in the long run. It is not because I feel disheartened. Tibetans have placed such faith and trust in me that as one among them I am committed to playing my part in the just cause of Tibet. I trust that gradually people will come to understand my intention, will support my decision and accordingly let it take effect.

I would like to take this opportunity to remember the kindness of the leaders of various nations that cherish justice, members of parliaments, intellectuals and Tibet Support Groups, who have been steadfast in their support for the Tibetan people. In particular, we will always remember the kindness and consistent support of the people and Government of India and State Governments for generously helping Tibetans preserve and promote their religion and culture and ensuring the welfare of Tibetans in exile. To all of them I offer my heartfelt gratitude.

With my prayers for the welfare and happiness of all sentient beings.