Now, environmental problems are something new to me. When we were in Tibet, we always considered the environment pure. For Tibetans, whenever we saw a stream of water in Tibet, there was no question as to whether it was safe for drinking or not. However, it was different when we reached India and other places. For example, Switzerland is a very beautiful and impressive country, yet, people say "Don't drink the water from this stream, it is polluted!" 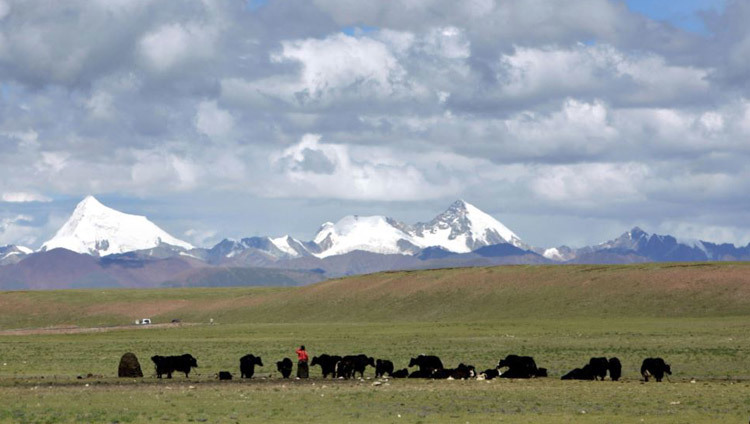 Gradually, we Tibetans gained the knowledge and awareness that certain things are polluted and cannot be utilized. Actually, in India when our settlements started in some places, large number of Tibetan fell ill with stomach problems as a result of drinking polluted water. So through our own experience and by meeting scientists we have become better educated about environmental issues.

When we look back at our own country, Tibet, it is a big country with a Vast land area with high altitude and a cold and dry climate. Perhaps these things provided some kind of natural protection to Tibet's environment - keeping it clean and fresh. In the Northern pastures, the rocky areas, the forested areas and the river valleys there used to be lots of wild animals, fish and birds. As a- Buddhist Country there were. 'Certain traditional laws in Tibet c_ncerned with a complete ban on fishing and hunting.

I remember in Lhasa when I was young, some Nepalese did a little hunting arid fishing because they were not very much concerned with Tibetan laws. Otherwise there was a real safety for animals at that time.

There is a strange story. Chinese farmers and road builders who came to Tibet after 1959 were very fond of meat. They usually went hunting birds, such as ducks, wearing Chinese army uniform or Chinese clothes. These clothes startled the birds and made them immediately flyaway. Eventually these hunters were forced to wear Tibetan dress. This is a true story! Such things happened, especially during the 1970's and 80's, when there were still large numbers of birds.

Recently, a few thousand Tibetans from India went to their native places in Tibet. When they returned, they all told the same story. They said that about forty or fifty years ago there were huge forest covers in their native areas. Now all these richly forested mountains have become bald like a monk's head. No more tall trees. In some cases the roots of the trees are even uprooted and taken away! This is the present situation. In the past, there were big herds of animals to be seen in Tibet, but few remain today. Therefore much has changed.

The large-scale deforestation in Tibet is a matter of great sadness. It is not only sad for the local area, which has lost its beauty, but for the local people, who now find it hard to collect even enough fuel wood. Relatively, these are small problems looking from a wider perspective, deforestation has other extensive negative consequences. Firstly, many parts of Tibet are high and dry. This means that it takes longer for the land to recover compared to lower regions with humid climate, and the negative effects therefore last much longer.

Secondly, many of the rivers which flow through large areas of Asia, through Pakistan, India, China, Vietnam, Laos and Cambodia, rivers such as the Yellow river, Brahmaputra, Yangtse, Salween and Mekong, all originate in Tibet. It is at the places of origin of these rivers that large-scale deforestation and mining are taking place. The pollution of these rivers has a drastic effect on the down-stream countries.

According to Chinese statistics there are 126 different minerals in Tibet. When these resources were discovered by the Chinese, they were extensively mined without proper environmental safeguards, resulting in devastation of the environment. As a result, deforestation and mining are causing more floods in the lowlands of Tibet.

The deforestation of the Tibetan plateau, according to experts, will change the amount of reflection from snow into space (forested areas absorb more solar radiation) and this affects the monsoon of the next year, not only in Tibet, but in all surrounding areas. Therefore, it becomes even more important to conserve Tibet's environment.

I think the climate change in Tibet will not affect Australia immediately. So your concern for Tibet is a genuine altruistic one. Concern from China and India may not be genuine, as it directly relates to their own future.

The Tibetan environment is very delicate and it is very important. Unfortunately, as you know, in the Communist world, in countries such as the former Soviet Union, Poland and the former East Germany, there were many pollution problems in the past resulting from carelessness, simply because factories are growing bigger and production is rising with little regard to the damage this growth causes to the environment. The situation is the same in the People's Republic of China. In the 1970's and 1980's there was no awareness of pollution, although now I think some awareness is developing. So I think the situation was initially to do with ignorance.

According to some information. It seems that during the Cultural Revolution (1966-l976) temples in China proper suffered less destruction than in other areas. This may not be due to government policy, but rather may be the result of discrimination by local officials. So it seems that Chinese officials have neglected the environment in the places where ethnic groups are living.

Another story comes from the Dingri region of southern Tibet. Five years ago a local Tibetan told me about a river that all the villagers used for drinking. There were also Chinese living in the area. The Chinese residents belonging to the People's Liberation Army (PLA), were informed not to drink the water from the river, but local Tibetans' were not informed. Tibetans still drink the polluted water. This shows that some form of negligence is going on, and obviously is not because of lack of awareness, but due to other reasons. In this light, any concern from other human brothers and sisters for our unfortunate situation, unfortunate people and their environment is very gratefully received and very important.

Then talking about the environment more generally, it comes to mind that one key factor in the future is human population. Look at India and China, there are so many people. The standard of living is very low. It is very difficult to explain or educate the masses about the environment when their most pressing concern is survival.

For example, in our second home in the Kangra Valley, (Himachal Pradesh, India), the local Indian villager's survival depends on cutting wood and slate mining. 'On the eastern side of Dharamsala we have large-scale slate quarries. Some of my Indian friends told me' that I should speak-out about the huge environmental damage that these quarries cause, but it is very difficult. For at least a few hundred families livelihood depend solely on these activities. Unless we show them new ways of earning their livelihood, it is very difficult to stop them. Therefore, the population explosion is ultimately a very serious matter. So family planning is crucial, especially in the developing world.

Some companies and governments actually make profit from these activities, but the nature of their production is a destructive one. For example, a bullet is designed to kill a person, not as a decoration piece! All these war machines look very beautiful When I Was small, these machines seemed beautiful to me, even small toys like tanks and machine guns seemed very beautiful, very smart, don't you think? The whole military establishment: their uniforms, their discipline, everything seems very striking and very impressive, but the very purpose of this organization is to kill. So we must think of these matters if 'we are to be truly concerned about the environment, not only for this generation, but for future generations as well.

I think all these things are inter-related. As I mentioned earlier, family planning should be encouraged. From a Buddhist perspective it is quite simple. Each human life is very precious. From this perspective it is better to avoid or control birth, but today there are 1.5 billion precious lives - too many precious lives! As a result it is not only one or two precious human lives that are at stake, but the question is of the survival of humanity at large. So therefore the conclusion we arrive at is that we must take family planning very seriously, if we are to save the prosperity of the entire humanity, preferably through non-violent means, not through abortion or killing, but by some other means. I often half j0kingly say... more monks and nuns. That is the most non-violent arid effective method. So if you can't become a monk or a nun, then practice other non-violent methods of birth control.

Then there is the question of how to reduce military establishments. The groundwork we must do is to promote non-violence. But this is not enough because we have so many conflicts in this world. So long as humanity remains, so will conflict.

One way of promoting non-violence against warfare and the production of weapons is to promote ideas of dialogue and compromise, and the spirit of reconciliation. I think we must promote these ideas at the family and community level. It is much more practical to solve problems through dialogue rather than through confrontation.

So the concept of dialogue must begin at the family level. As individuals we must look within, investigate, analyze and then try to overcome contradictory ideas. We must not lose hope or despair of the irritating conflict we find inside ourselves. So these are some of the ways in which we can ultimately solve environmental problems.

Finally, I want to tell you that self-confidence and enthusiasm are the key to a successful life, and co success in any activity one is engaged in. We must be determined and must have an optimistic outlook, then even if we fail we will have no regrets. On the other hand, lack of determination and effort will cause double regret. Firstly because the objectives were not realized, and secondly because you feel guilty and regret at not having made full effort in the realization of the objectives.

So therefore, whether we commit ourselves or not it is an individual choice. Once you have made up your mind, you must go forward with a single-minded devotion in spite of the obstacles. This is very important.

His Holiness the Dalai Lama 's speech at the "Endangered Tibet" Conference in Snlnn, Australia on 28 September 1996.