Universal Responsibility and the Environment

As a boy studying Buddhism, I was taught the importance of a caring attitude toward the environment. Our practice of nonviolence applies not just to human beings but to all sentient beings - any living thing that has a mind. Where there is a mind, there are feelings such as pain, pleasure, and joy. No sentient being wants pain: all wants happiness instead. I believe that all sentient beings share those feelings at some basic level.

In Buddhism practice we get so used to this idea of non-violence and the ending of all suffering that we become accustomed to not harming or destroying anything indiscriminately. Although we do not believe that trees or flowers have minds, we treat them also with respect. Thus we share a sense of universal responsibility for both mankind and nature. 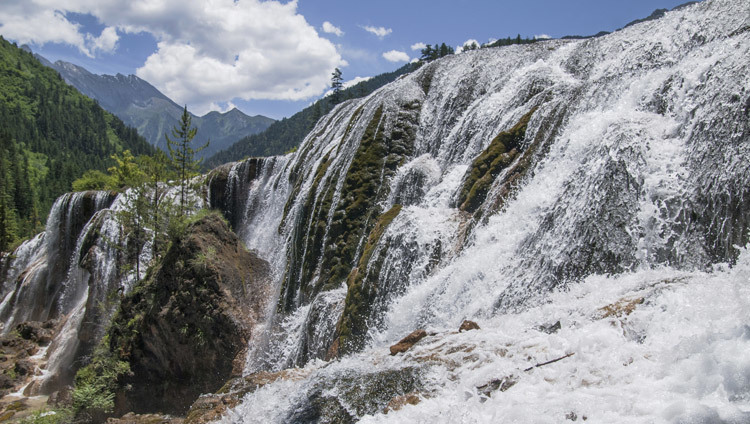 Our belief in reincarnation is one example of our concern for the future. If you think that you will be reborn, you are likely to say to yourself, I have to preserve such and such because my future reincarnation will be able to continue with these things. Even though there is a chance you may be reborn as a creature, perhaps even on a different planet, the idea of reincarnation gives you reason to have direct concern about this planet and future generations.

Tibetan feelings about the environment are based entirely on religion. They are derived from the whole Tibetan way of life, not just from Buddhism. For example, consider Buddhism in Japan or Thailand, in environments different from ours. Their culture and their attitude are not the same as ours. Our unique environment has strongly influenced us. We don't live on a small, heavily populated island. Historically, we have had little anxiety with our vast area, low population, and distant neighbors. We haven't felt as oppressed as people in many other human communities.

It is very possible to practice the essence of a faith or culture without practicing a religion. Our Tibetan culture, although culture, although highly influenced by Buddhism, did not gain all its philosophy from Buddhism. I once suggested to an organization dealing with Tibetan refugees that it would be interesting to do some research on how much our people have been affected by their approach to life itself in Tibet. What are the factors that make Tibetans generally happy al1d calm? People are always looking for answer in our unique religion, forgetting that our environment is just as unusual.

Concern for the environment is not necessarily holy, nor does it always require compassion. We Buddhists express compassion for all sentient beings, but this compassion is not necessarily extended to every rock or tree or house. Most of us are somewhat concerned about our own house, but not really compassionate about it. We keep it in order so that we can live and be happy. We know that to have happy feelings in our house we must take care of it. So our feelings may be of concern rather than compassion.

Similarly, our planet is our house, and we must keep it in order and take care of it if we are genuinely concerned about happiness for ourselves, our children, our friends, and other sentient beings who share this great house with us. If we think of the planet as our house or' as "our mother - Mother Earth - we automatically feel concern for our environment. Today we understand that the future of humanity very much depends on our planet, and that the future of the planet very much depends on humanity. But this has not always been so clear to us. Until now, you see, Mother Earth has somehow tolerated sloppy house habits. But now human use, population, and technology have reached that certain stage 'where Mother Earth no longer accepts our presence with silence. In many ways she is now telling us, "My children are behaving badly," she is warning us that there are limits to our actions.

The Tibetan Buddhist attitude is one of contentment, and there may be some connection here with our attitude toward the environment. We don't indiscriminately consume. We put a limit on our consumption. We admire simply living and individual responsibility. We have always considered ourselves as part of our environment, but not just any part. Our ancient scriptures speak of the container and the contained. The world is the container  - our house and we are the contained- the contents of the container.

In my Five-Point Peace Plan I have proposed that all of Tibet become a sanctuary, a zone of peace. Tibet was that once, but with no official designation. Peace means harmony: harmony between people, between people and animals, between sentient beings and the environment. Visitors from all over the world could come to Tibet to experience peace and harmony. Instead of building big hotels with many stories and many rooms, we would make small building, more like private homes, that would be in better harmony with nature.

Peace and survival of life on earth as we know it are threatened by human activities that lack a commitment to humanitarian values. Destruction of nature and natural resources results from ignorance, greed, and lack of respect for the earth's living things. This lack of respect extends even to the earth's human descendants, the future generations who will inherit a vastly degraded planet if world peace doesn't become a reality and if destruction of the natural environment continues at the present rate.

Our ancestors viewed the earth as rich and bountiful, which it is. Many people in the past also saw nature as inexhaustibly sustainable, which we now know is the case only if we care for it. It is not difficult to forgive destruction in the past that resulted from ignorance. Today, however, we have access to more information. It is essential that we re-examine ethically what we have inherited, what we are responsible for, and what we will pass on to coming generations.

Clearly this is a pivotal generation. Global communication is possible, yet confrontations take place more often than meaningful dialogues for peace. Our marvels of science and technology are matched, if not outweighed, by many current tragedies, including human starvation in some parts of the world and extinction of other life forms. Exploration of outer space takes place at the same time the earth's own oceans, seas, and freshwater areas grow increasingly polluted, and their life forms are still largely unknown or misunderstood. Many of the earth's habitats, animals, plants, insects and even microorganisms that we know as rare my not be known at all by future generations. We have the capability and the responsibility. We must act before it is too late.